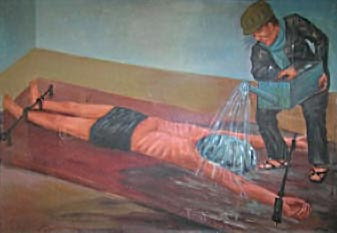 The Hill - Intelligence subcommittee Chairwomen Jan Schakowsky (D-Ill.) and Anna Eshoo (D-Calif.) are leading an ongoing investigation into what they described as a practice of incomplete and often misleading intelligence briefings, which arose in the wake of CIA Director Leon Panetta’s June 24 admission that intelligence officials failed to notify Congress about a top-secret program to assassinate al Qaeda leaders.
The Speaker came under fire after she said at a testy press conference in May that the CIA had lied to her and other members during a 2002 briefing about its use of waterboarding on detainees. Pelosi was the ranking member of the Intelligence panel at the time.

“We were told explicitly that waterboarding was not being used,” she said at the May press conference. “They [the CIA] misled us all the time.”

Republicans demanded proof from Pelosi of CIA lies, and the Speaker was also criticized for not objecting to waterboarding when she first learned about it.

Nadeam Elshami, a spokesman for the Pelosi, on Tuesday said that the Speaker’s May statement speaks for itself. Read more.