And Then There Were Five

October 13, 2009
The last surviving members of an ancient Amazonian tribe are a tragic testament to greed and genocide 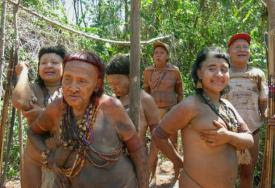 Guy Adams @ Common Dreams - They are the last survivors: all that's left of a once-vibrant civilisation which created its own religion and language, and gave special names to everything from the creatures of the rainforest to the stars of the night sky.
Just five people represent the entire remaining population of the Akuntsu, an ancient Amazonian tribe which a generation ago boasted several hundred members, but has been destroyed by a tragic mixture of hostility and neglect. Read more.