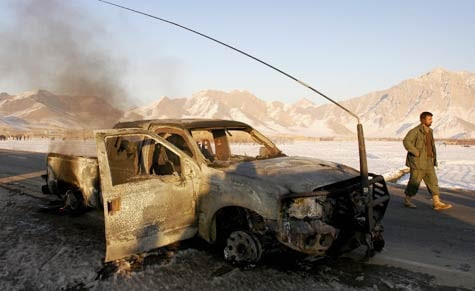 (Farzana Wahidy/AFP/Getty Images/January 2007 file photo)
ProPublica - As the war in Afghanistan entered its ninth year, the Labor Department recently released new figures [1] for the number of civilian contract workers who have died in war zones since 9/11. Although acknowledged as incomplete, the figures show that at least 1,688 civilians have died and more than 37,000 have reported injuries while working for U.S. contractors in Iraq and Afghanistan.

More than 5,200 soldiers have died in the two war zones, meaning that one civilian contractor has died for every three soldiers — a ratio that reflects the unprecedented degree to which the Pentagon has outsourced the work of war. Civilian contractors make up [2] about half the total U.S. forces in the war zones and they have been deployed on the front lines far more than any previous U.S. conflict [3]. Iraq and Afghanistan are the most outsourced wars in U.S. history. Read more.

France to bar mass killing of male chicks from 2022

July 18, 2021
France will ban from next year the killing of male chicks by crushing or gassing, a practice denounced as barbaric by animal welfare groups, and will... read more .
Post a Comment
Read more