Naomi Klein, author of “The Shock Doctrine” has asked that her named be removed from the credits of the new film, who's title bears the same name. Klein's disowning of the film, directed by Michale Winterbottom, is reported to have come as a result of her dissatisfaction with the directors' use of narration, instead of keeping the integrity of the book's storytelling style in tact, which would have resulted in basing the film on first-hand interviews, as opposed to an anonymous narration. 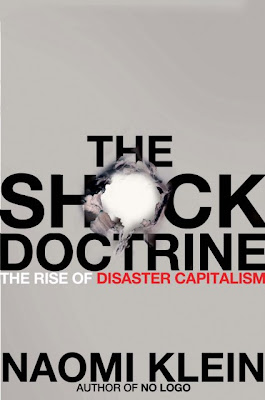 From The Guardian UK:

Naomi Klein has disowned Michael Winterbottom’s forthcoming screen adaptation of her bestselling book, The Shock Doctrine, by asking to be removed from the credits of the documentary after serious differences arose between her and the British director.

The Canadian journalist, activist and author of No Logo had originally been slated to narrate the film and act as a consultant.

But it is thought Klein became unhappy with Winterbottom’s take on her critique of “disaster capitalism” and western economic cynicism after seeing early cuts of the film. She is understood to have felt the documentary – which accuses the US and other countries of exploiting natural and man-made catastrophes in developing countries to push through free-market reforms from which they stand to gain – would have benefited from more interviews and less narration. Read more

November 23, 2022
For years, former president Donald Trump has been able to push off a lawsuit filed against him by E. Jean Carroll, a writer and advice columnist who says he raped her in a department store dressing room in the mid-1990s. When Carroll decided to come forward—describing the alleged assault in a book excerpt in 2019—Trump had been president for two years, and the statute of limitations to bring criminal charges or a lawsuit against him had... read more .
Post a Comment
Read more