The Life and Legacy of Ted Kennedy @ Democracy Now! 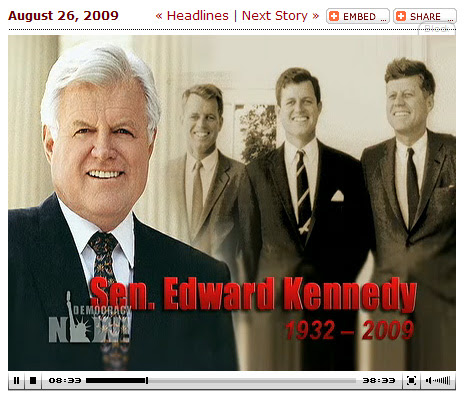 Democracy Now! - Democratic Senator Edward Kennedy of Massachusetts died last night in his home in Hyannis Port after a bout with brain cancer. He was seventy-seven years old. Kennedy served in the Senate for forty-six years and was known by some as the “liberal lion” for his steadfast advocacy of progressive causes. In recent years, Kennedy endorsed President Obama’s bid for the White House in what was seen as a key turning point in the presidential campaign.

November 24, 2021
Three German parties have reached a deal to form a new government that will end the era of longtime Chancellor Angela Merkel, according to Olaf Scholz, who is poised to replace her.  Read more.
Post a Comment
Read more

November 24, 2021
A jury on Wednesday found all three suspects guilty in the murder of Ahmaud Arbery, a 25-year-old Black man who was chased and shot while running in February 2020.  Read more .
Post a Comment
Read more

More than 30 dead after migrant boat sinks in English Channel

November 24, 2021
French President Emmanuel Macron vowed on Wednesday to "find those responsible" after more than 30 migrants drowned trying to make their way across the English Channel to Britain. French authorities said four people had been... read more .
Post a Comment
Read more