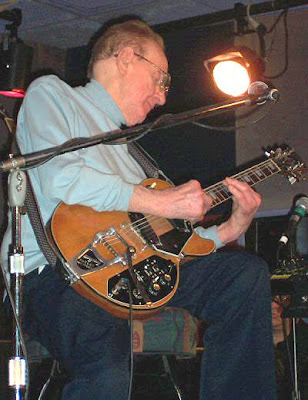 The Huffington Post - Les Paul, who invented the solid-body electric guitar later wielded by a legion of rock 'n' roll greats, died Thursday of complications from pneumonia. He was 94.

According to Gibson Guitar, Paul died at White Plains Hospital. His family and friends were by his side.

As an inventor, Paul also helped bring about the rise of rock 'n' roll with multitrack recording, which enables artists to record different instruments at different times, sing harmony with themselves, and then carefully balance the tracks in the finished recording.

The use of electric guitar gained popularity in the mid-to-late 1940s, and then exploded with the advent of rock in the mid-'50s.

"Suddenly, it was recognized that power was a very important part of music," Paul once said. "To have the dynamics, to have the way of expressing yourself beyond the normal limits of an unamplified instrument, was incredible. Read more.