New York Times - Dominick Dunne, the author and journalist who covered the trials of celebrity defendants like Claus von Bülow, O. J. Simpson and William Kennedy Smith, and wrote frequently on the intersection of high crimes and high society, has died. He was 83. His son Griffin Dunne told the Web site of Vanity Fair, where Mr. Dunne was a special correspondent, that he died of bladder cancer at his home in Manhattan. Read more. 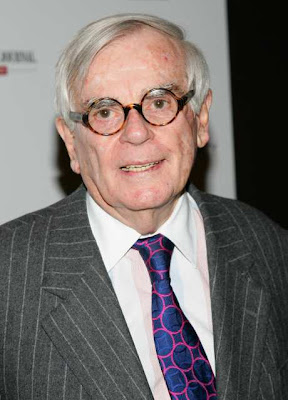 Is He Part of the In-Crowd or Simply Its Chronicler? He's Both, Friends Say, and That Can Get a Bit Dicey

LA Times - Dominick Dunne's eight-day visit started with dinner at the Regency Club. His pal Paige Rense, who edits Architectural Digest, invited him and a few others--all as rich or as famous as the people Dunne writes about.

Another night it was Mortons, watering hole for the stars. By the time he got to the big one, the cocktail party at Chasens to celebrate his new novel, "People Like Us," Dunne had worked his way through Los Angeles' upper crust.

That night at Chasens, the guest list glittered with names like Jackie Collins, Candy and Aaron Spelling, Billy Wilder and Michelle Phillips, who spent the night air-kissing one another, as Dunne would say. Later he made a curious disclaimer about the whole thing: "All my life I've thought of myself as an outsider." Read more.