Katrina: How Bush turned a natural disaster into a for-profit massacre 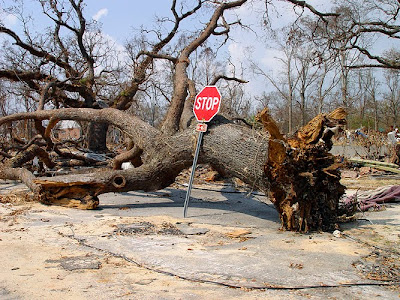 While the Bush response to the aftermath of Hurricane Katrina is most often cited as "inept", such a description inevitably sanctions Bush as patently stupid, though nonetheless innocent.

But is that an honest assessment of what happened?

Was Bush's action, or inaction rather, a manifestation of weak-thinking? Or, does the truth of how his administration's handling of the affairs in the Gulf Coast, post-Katrina, speak more to a business model that Naomi Klien has aptly entitled "The Shock Doctrine"?

Disaster capitalism, as Klein writes in her book, is a form of money-making that relies on the exploitation of suffering and fear, so as to leverage power and ram through unpopular, extremists government policies in a time of unmitigated crisis; crisis which, in large part propagated by those in power who should have been instilling calm and peace, instead of ramping-up the death toll by way of criminal negligence.

As we approach yet another anniversary of one of history's greatest natural, disasters albeit aided and abetted by government-endorsed corporate greed, James Ridgeway writes of "The Secret History of Hurricane Katrina."

May 13, 2022
early 150 people have been killed and scores wounded during gunfights between warring gangs in Haiti , as the latest surge of... read more .
Post a Comment
Read more