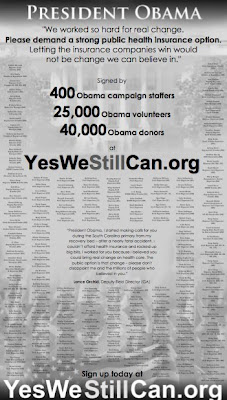 The Progressive Change Campaign Committee raised over $100,000 online to fund the ad, which will be published in the paper this week. It features a petition signed by 400 former Obama campaign staffers, 25,000 Obama volunteers, and 40,000 Obama donors that states health care reform without a public option is not "change we can believe in." The full page can be seen at ActBlue, where the group is now raising money to turn it into a television spot featuring Obama organizers. Read more.

The People Must Create a New Americas

July 01, 2022
When I was in my early 20s and naïve, and I would lament petty things to my mother, she would say, "Why don't you go back and live in Iran for two years, and then let me hear you complain." It was her attempt to... read more .
Post a Comment
Read more