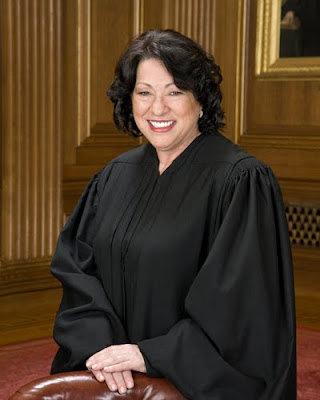 - Supreme Court Justice Sonya Sotomayor -
Max Eternity - In the age of the Robber baron, the mid to late 19th Century, America's judicial system gave unprecedented powers to the railroad industry and other mega-corporations by awarding them 14th Amendment Rights; deeming corporations as "human beings" when the court granted the businesses "personhood" status. The 14th Amendment to the US Constitution was not originally intended for this purpose; actually having been instituted as a protection for former African slaves living in America, who had prior been declared non-human entities.

With the 14th Amendment however, Black people, if only by law and not in practice, became recognized by the United States government via the Supreme Court, human beings. Yet no sooner than the courts began to enforce the amendment as law, big corporations seeking to evade paying taxes, began crafting legal arguments; subverting the intent of the law for their own private interests.

Fast forward nearly 150 years later, where today's Supreme Court stands at the precipice of taking yet another dramatic turn; deciding whether or not the existing restraints placed on corporations when it comes to political spending--influencing the outcome of elections with unfettered cash infusions, should be removed.

For the moment it would seem that Big Business is about to handed new political muscle , because it's no secret that the majority conservative Supreme Court is in agreement that corporations have First Amendment rights equal to that of a "person." However there is at least one Judge who does not agree, Justice Sonya Sotomayor, who believes that the original Santa Clara decision was flawed to begin with; in need of reexamination.

Questioning the legitimacy of "personhood" status for corporations, The Wall Street Journal writes of Sotomayor:

In her maiden Supreme Court appearance last week, Justice Sonia Sotomayor made a provocative comment that probed the foundations of corporate law.

During arguments in a campaign-finance case, the court's majority conservatives seemed persuaded that corporations have broad First Amendment rights and that recent precedents upholding limits on corporate political spending should be overruled.

But Justice Sotomayor suggested the majority might have it all wrong -- and that instead the court should reconsider the 19th century rulings that first afforded corporations the same rights flesh-and-blood people have.