Max Eternity - Ever since Senator Obama announced his support for a Single-Payer, Medicare-for-all, style of Universal Healthcare--while campaigning to be President--Progressives have heeded the call and lent their support. Yet, once becoming President, as a result of invigorated new, young Liberals and hard-core advocates of social justice, much of the President's base found itself disillusioned with his swift ideological reversal, now having embraced nearly all of "The Bush Doctrine", a collective of dogma and policies named after the former White House resident.

Nonetheless, the Left held steadfast, in hopes that the replacement for Single-Payer, known as the "Public Option", would be vigorously endorsed by Obama. But as it turns out, those hopes too have been dashed, with the leadership, or lack thereof, coming from President Obama resulting in what is being described as a "bailout for the health insurance industry."

Labor unions are displeased too, with the President of the AFL-CIO saying recently that "Health Care Bill Must Change to Be Real Reform." And Howard Dean, former leader of the Democratic National Committee, which got Obama elected, has said in response the the Senate bill "This is a bigger bailout for the insurance industry than AIG,"

The latest version of the Obama inspired healthcare bill that has recently passed in the Senate, is not at all like the one that was originally drafted in the House, which had been at first a bill that Progressives, for the most part, stood behind. However with in now being the case that no only is Single-Payer no longer an option, but that also the Public-Option is not included in the bill either, some find theselves saying pass the bill because it's all there is, while others are saying go back to the original bill.

Among other political heavyweights, weighing in on all this is Jacob S. Hacker, who is said to be one of the core "Thinkers" that originally conceptualize the idea of a Public Option. Of the now dire circumstances surrounding the current healthcare bill, Hacker says in part:

Progressives have good reason to be angry. Yet we should harness our anger to fix the bill--now and every year from now. The current bills in Congress do too little to help Americans immediately; their main actions are delayed for years. If and when legislation passes, progressives should demand immediate concrete actions to make the promise of a reform a reality more quickly and more effectively.

So a bill must pass. Yet it must be a better bill that passes. And it must be understood by the President, the Congress and every American as only a step--an important but ultimately incomplete step--toward the vital goal that the campaign for the public option embodied: good affordable health care for every American.

In his analysis, Mr. Hacker makes a good argument, while also affirming his decision to embrace the current bill. And yet, given the lack of oversight and complete disregard of trust that we've already seen with this White House--the failure to respond to the foreclosure crisis--out of control double-digit unemployment--a continuation of the illegal wars in Iraq and Afghanistan--a collusion in the lack of transparency with Guantanamo Bay Prison and other war crime activities committed by his predecessor--a blank check worth trillions of dollars doled out to private banks, using public funds--the total embrace of the civil liberties encroaching, Patriot Act--and other questionable policies, to what extent can the reassuring words of Mr. Hacker serve to offset the burnt bridges thus far laid to waste by President Obama and his staff...resulting in the diminished standard of living by millions of Americans?

In the video below, Amy Goodman of Democracy Now! speaks with author, constitutional lawyer and journalist for Salon.com, Glenn Greenwald. 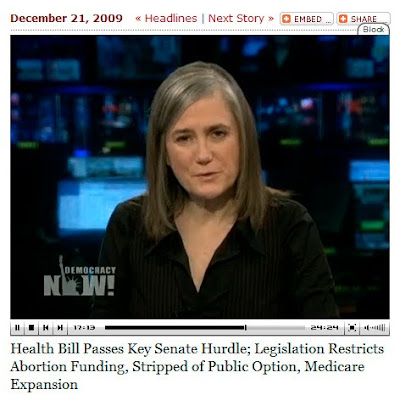