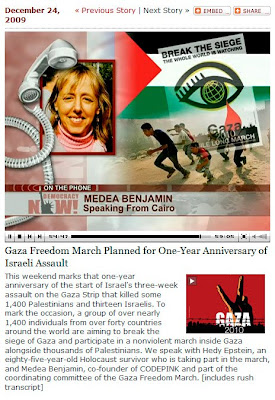 Truthout.org - More than 50,000 people are expected to take to the streets of Gaza on Dec. 31 for a mass march designed to send a message to the United States, a key supporter of Israel's army, that the situation in Gaza violates international human rights laws.

The idea behind the "Gaza Freedom March" comes from CODEPINK, a women's peace group committed to drawing attention to the humanitarian crisis in the occupied Palestinian territories, among other campaigns.

Organisers say the main catalyst for the mobilisation was the Goldstone Report, commissioned by the United Nations and written by renowned South African jurist Richard Goldstone.

The 575-page report, released in September, detailed gross human rights violations and war crimes committed by both Israel and Hamas in Gaza during the Dec. 27, 2008 to Jan. 18, 2009 conflict.

However, it was particularly critical of Israel, calling the military campaign "a deliberately disproportionate attack designed to punish, humiliate, and terrorise a civilian population, radically diminish its local economic capacity both to work and to provide for itself, and to force upon it an ever increasing sense of dependency and vulnerability." Read more.