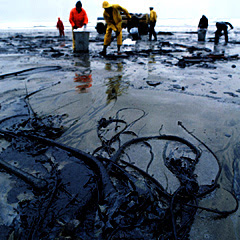 The Raw Story - A tugboat struck the same reef as the Exxon Valdez tanker 20 years ago, spilling diesel into Alaska's Prince William Sound and creating a three-mile-long slick, the US Coast Guard said on Friday.

An unknown quantity of the fuel leaked from the Pathfinder tug after it ran aground Wednesday on Bligh Reef. The boat's owners were pumping the remaining diesel from the original 33,500 gallons (127,000 liters) in its tanks.

The tug had been scouting shipping lanes for ice when it struck the same rock that did for the Exxon Valdez on March 24, 1989, spilling 11 million gallons of crude into the sea in the worst US oil disaster. Read more.

January 14, 2022
Nitin Nohria, who spent 10 years as dean of Harvard Business School before stepping down in 2020, is joining Thrive Capital as a partner and executive chairman.  Read more.
Post a Comment
Read more

January 15, 2022
Thousands of protesters took to the streets of Austria’s capital Vienna to protest against government plans to introduce mandatory COVID-19 vaccinations for next month.  Read more .
Post a Comment
Read more