Media Democracy: Public broadcasting and the shame of corporate news

November 14, 2009
Common Dreams - If we want news that actually serves the interests of democracy, it can be neither a commodity in itself nor a lure to turn the attention of audiences into a commodity. This means journalism practiced for its own sake, not as a means of making a profit. But how can such journalism be sustainable? In Extra!'s "Future of Journalism" issue (7/09), we described some of the alternative models, including non-profit news outlets subsidized by foundations, and citizen journalism carried out on a largely volunteer basis.
- click to enlarge - 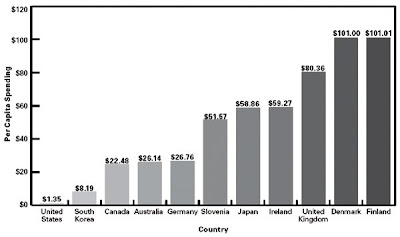 One model we did not discuss is public media-that is, journalism funded by the citizenry via the government. In many ways, it's the obvious solution to the problem of commodity journalism: The state is one of the few institutions whose resources can compare to those of the corporate sector, and at least in theory is supposed to represent the interests of the populace as a whole.

In practice, of course, governments often look out for their own interests, and those of their most powerful supporters. This has been the problem with so-called public broadcasting in the United States, whose promise has gone largely unrealized. Not only is the government funding for PBS and NPR pitifully small in comparison to the support other countries give their public systems (see chart), but the U.S. "public" broadcasters are by design dependent on massive corporate subsidies; with only 40 percent of public broadcasting revenue coming from federal, state or local government (CPB report, 9/09), it's almost impossible to get a show on "noncommercial" television in the United States unless a wealthy for-profit company is willing to buy expensive "underwriting announcements" to air before and after it. (PBS's primary news show, the NewsHour With Jim Lehrer, is mostly owned by the for-profit conglomerate Liberty Media.) And the Corporation for Public Broadcasting, which in theory is supposed to serve as a "heat shield" to protect programmers from political pressures, has in practice been turned into a vehicle for conservatives in Congress to police funding recipients for signs of dangerous ideological independence (Extra! Update, 6/05). Read more.

August 17, 2022
Black residents of Lexington, Mississippi are calling for a U.S. Justice Department probe of systemic racism in the town as they filed a federal lawsuit Tuesday against the municipality, its police department, and current and former police officials, including an ex-chief fired for racist boasts about shooting a fleeing man 119 times.  Read more.
Post a Comment
Read more

August 14, 2022
Author and law professor Maurice Stucke explains why the practices of Google, Amazon, Facebook, and Apple are so dangerous and... read more .
Post a Comment
Read more

August 16, 2022
Apple has told its employees they must come in to the office for at least three days a week from next... read more.
Post a Comment
Read more