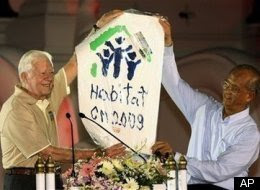 The Huffington Post - Carter and his wife, Rosalynn, are among 3,000 volunteers from 25 countries working with Habitat for Humanity this week to help build and repair homes along the Mekong River in Thailand, Vietnam, China, Cambodia and Laos.

The homes in Cambodia are being built for families currently living in a garbage dump, the ones in Vietnam are for fishermen who now live on their boats, and the project in China involves construction of an apartment building in a part of Sichuan province devastated by a 2008 earthquake.

Habitat for Humanity's Chief Executive Officer Jonathan Reckford said the Georgia-based nonprofit group would construct houses for 50,000 families in the Mekong region over the next five years.

"In an area of the world where many people live in deplorable conditions, we have a chance to help families improve their housing," said Carter, wearing sneakers, jeans and a work shirt. He and his wife spent Monday helping build 82 homes in honor of Thai King Bhumibol Adulyadej, who celebrates his 82nd birthday next month. Read more.