A Messiah of the Poor, A Lover of Non-Violence

Common Dreams - King realized that poverty needed to be dealt with in America. Poverty was not as popular a message as civil rights. Favorable and abundant media coverage dried up. Then on April 4, 1967, King gave the "Beyond Vietnam" speech at the Riverside Church in New York City. Although he had been warned not to do so, King spoke out against the Vietnam War. Moreover, King spoke of a larger soul-sickness in America of which the war was only a symptom. This was not a popular message.

King spoke out against the militarism and the hyper-nationalism that he saw in his country. He viewed it as a form of idolatry. "A true revolution of values will lay hand on the world order and say of war: ‘This way of settling differences is not just.' This business of burning human beings with napalm, of filling our nation's homes with orphans and widows, of injecting poisonous drugs of hate into the veins of people normally humane, of sending men home from dark and bloody battlefields physically handicapped and psychologically deranged, cannot be reconciled with wisdom, justice and love. A nation that continues year after year to spend more money on military defense than on programs of social uplift is approaching spiritual death."

King came to see war as an impractical solution to humanity's challenges: "The choice is not between violence and nonviolence. It is between nonviolence and nonexistence." These sound like radical words, even foolish. However, our own intelligence agencies have concluded that the Iraq war actually has increased the likelihood of terrorism. In a world with increasing nuclear weapons, and more biological and chemical weapons, violence might be the most naive thing in which to believe.

Martin Luther King Day commemorations neglect King's evolution and the fact that he devoted his final years to opposing American militarism. He claimed, "The greatest purveyor of violence in the world today (is) my own government." These are strong words. King spoke out forcefully. But the stakes are high: humanity's survival.

Decades later, King's message is sanitized, omitting parts of his dream for humanity that may be critical.

How would King feel about Obama? He might not be as happy as many people might assume. King might care less about Obama's race than he would about the president-elect's positions on poverty and stopping war.

Obama promises less violence and more diplomacy; he is not a proponent of nonviolence though, and has spoken explicitly of killing.

Obama's pending inauguration actually overshadows Martin Luther King Day, and the news media focus on how far America has come toward reaching King's "dream" of racial equality. As significant and exciting as an Obama presidency is, it does not encompass the vision that Martin Luther King Jr. ultimately held. Read More. 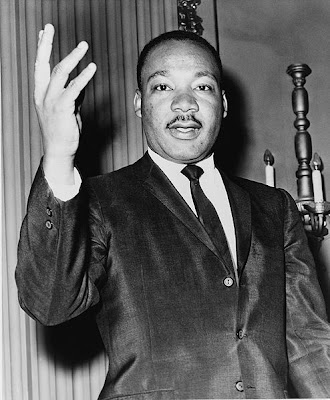