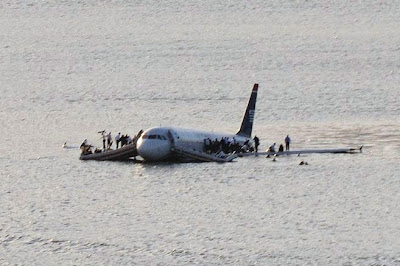 A US Airways jet dropped abruptly out of the sky into the frigid waters of the Hudson river yesterday after being crippled by what initial reports said were birds entering one or both of its engines shortly after take-off from La Guardia airport.

Across New York, astonished residents, workers and tourists watched as the Airbus 320, with 150 passengers and five crew on board, descended and struck the water a stone's throw from the densely populated avenues of Manhattan. The jet skimmed the surface almost like a sea-plane. Read More.