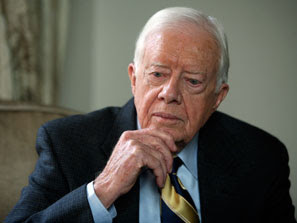 - click photo to view video -
Former President Jimmy Carter said President Barack Obama “personally” promised him that he would not wait until the last year of his presidency to begin working on a Middle East peace process.

During an interview with PBS’s Charlie Rose Tuesday night, Carter said of Obama: “One of the things that appealed to me was his promise in advance to me personally and to the public that he would start working on the Mideast peace process immediately after he was elected and not wait until the last year of his term.”

Carter has previously criticized former President Bill Clinton for waiting to hold a peace summit at Camp David between Israeli and Palestinian leaders until the end of his presidency. Former President George W. Bush also did not address a potential peace deal between the two camps until late in his term.

But Carter said he is pleased so far with Obama’s early efforts and that recently-appointed special envoy to the Middle East George Mitchell was an “outstanding” pick.

August 10, 2022
Nebraska woman has been charged with helping her teenage daughter end her pregnancy at about 24 weeks after investigators uncovered Facebook messages in which the two discussed... read more .
Post a Comment
Read more