Torture is a part of the Apparatus of American Power

Democracy Now - This week, President Obama said waterboarding is torture but gave no indication he is planning to hold anyone accountable for authorizing it. We speak with University of Wisconsin professor, Alfred McCoy, author of A Question of Torture: CIA Interrogation, from the Cold War to the War on Terror. 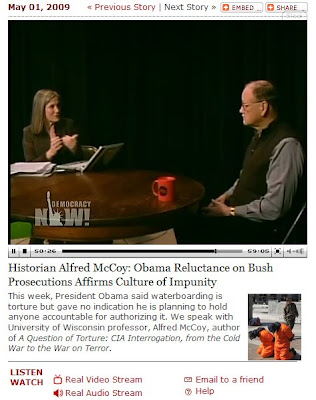 Sixty-two people were arrested Thursday outside the White House protesting U.S. torture policies. Dressed in orange jumpsuits and black hoods, the activists were calling for President Obama to close Guantanamo and end America’s policies of torture and indefinite detention. The activists criticized Obama for refusing to investigate or prosecute crimes committed by the Bush administration.

On Wednesday night President Obama said waterboarding was torture but he gave no indication that he planned to hold anyone from the Bush administration accountable for authorizing torture.