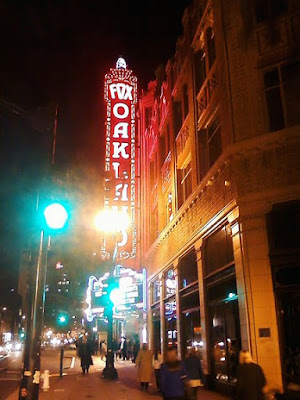 Max Eternity @ Truthout - In spite of an ongoing, grim economic downturn felt nationally, the city of Oakland continues to enjoy a beatification, resurrection and transformation which has turned a rather neglected, desolate place into a spectacularly cleaved jewel in the Pacific Northwest.

Architecture and public art are definitely playing a significant role in the emerging identity of Oakland. Take, for instance, a modernist-revival building and plaza a stone's throw from Lake Merritt and just a few blocks from Oakland's downtown Whole Foods and Trader Joe's. The sublimely designed Cathedral Christ of the Light, built by world-renowned firm SOM Architects, is but one of many fine examples in the city's newly refined, designer-built architectural environment. There's also a number of noteworthy restoration projects that have taken place, including the preservation of two historic theatres, the Fox and the Paramount, both of which were erected during the heyday of grand Hollywood musical productions. Read more.