June 20, 2009
Barak Obama, we love him because he's playful and friendly. I should know, I voted for him. But in each passing day, policy wise, it seems more and more that our intelligently charming President Obama is morphing into our deceptively charming pResident Bush. What's this all about? 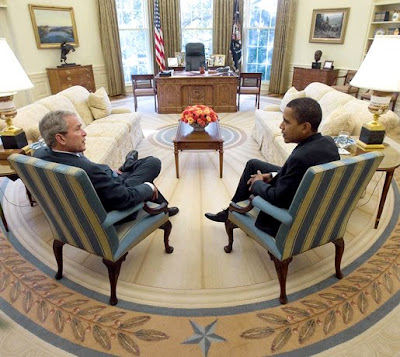 In courtroom battles and freedom-of-information fights from Washington, D.C., to California, Obama's legal arguments repeatedly mirror Bush's: White House turf is to be protected, secrets must be retained and dire warnings are wielded as weapons.

"It's putting up a veritable wall around the White House, and it's so at odds with Obama's campaign commitment to more open government," said Anne Weismann, chief counsel for Citizens for Responsibility and Ethics in Washington, a legal watchdog group. Read more.