Help Save the Earth, Time to Subsitute Hemp for Oil

June 18, 2009
Every man-made fiber we wear, sit on, cook with, drive in, are by-products of the petroleum industry -- all of which could be replaced by hemp. 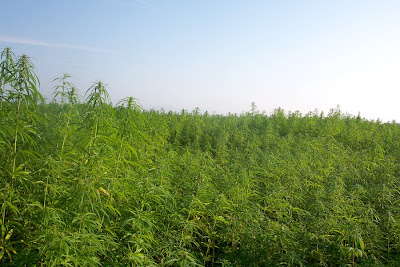 AlterNet - As the recession renews interest in the growing hemp marketplace as a potential boon for the green economy -- even Fox Business News has touted it -- hemp is becoming impossible to ignore.

But the plant's potential extends far beyond consumer-generated greenbacks. A low-input, low-impact crop, industrial hemp can play a significant role in our desperate shuffle to avoid catastrophic climate change.

"In terms of sustainability, there are numerous reasons to grow hemp," says Patrick Goggin, a board member on the California Council for Vote Hemp, the nation's leading industrial-hemp advocacy group.

Goggin launches into its environmental benefits: Hemp requires no pesticides; it has deep digging roots that detoxify the soil, making it an ideal rotation crop -- in fact, hemp is so good at bioremediation, or extracting heavy metals from contaminated soil, it's being grown near Chernobyl.

Hemp is also an excellent source of biomass, or renewable, carbon-neutral energy, and its cellulose level, roughly three times that of wood, can be used for paper to avoid cutting down trees, an important line of defense against global warming.

When it comes to hemp, environmental gains are inexorably intertwined with economic ones. The auto industry, hardly synonymous with being green but which has had the research dollars to apply new technology, can vouch for Goggin. For years European car makers have been using hemp-fiber-reinforced composite materials to replace fiberglass and in other components, such as door panels or dashboards. And now their American counterparts have joined in.

Blending hemp with plastics is not only cheaper for producers, but natural-fiber composites are roughly 30 percent lighter, which in turn leads to greater fuel efficiency for customers. And when they finally hit the junkyard, those parts partially biodegrade. Ford, General Motors, Chrysler, BMW, Mercedes-Benz and Honda all use this technology. Read more.