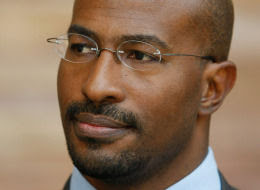 Arianna Huffington @ The Huffington Post - Thank you, Glenn Beck. By helping force the resignation of Van Jones, you have done a great service to your country. But in the exact opposite way than what you intended.

Your vile and vicious smear campaign has helped reverse one of the worst examples of miscasting since John Wayne took on the role of Genghis Khan in The Conqueror.

Don't get me wrong: Van Jones was the best person for the job he just gave up. But the job was not the best use of Van Jones.

Contrary to the media caricature, the real Van Jones is a thoughtful leader who knows how to use words to move people to action. To stick him behind a desk, working out the details of tax credits for green jobs -- incredibly important though the job is -- was never the best use of his unique and abundant skills.

This is not an attempt to put a positive spin on an ugly episode. I've actually been feeling this way ever since Van told me he was taking this job.

I remember going to the White House this spring for a briefing of journalists by David Axelrod. Before the meeting, Van and I met for a quick coffee and I was hit with the same overwhelming thought: how much we were going to miss his voice on the outside.

Now, thanks to Glenn Beck, we've got that voice back. No longer tied to his desk with a sock in his mouth, Van is now freed to do what he does best: inspire and energize groups around the country. Read more.