Bill Maher Challenges Obama: "Stand Up For The 70 Percent Of Americans Who Aren't Crazy" 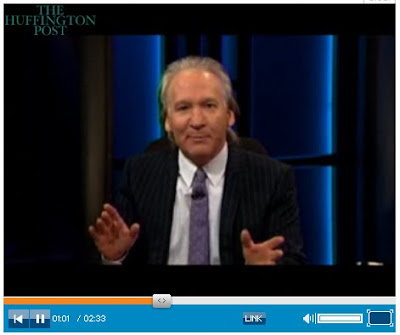 The Huffington Post - On "Real Time" Friday night, host Bill Maher closed his show with some sharp words for the Obama administration with regards to how they have responded to criticism from figures such as Glenn Beck and Sarah Palin.

Maher called the White House "cowards" for allowing Van Jones to resign following a series of right-wing attacks and for capitulating to those who complained about the nature of Obama's back-to-school speech.

"The Democrats just never learn. Americans don't realy care which side of an issue you're on as long as you don't act like pussies," Maher said. Click here to watch video.

New Rule: Democrats must get in touch with their inner asshole. And no, I'm not being gratuitously crude when I say that. I refer to the case of Van Jones, and I'm sure you know who Van Jones is. At least I hope you do, because I haven't a clue, or at least I didn't until this week, when I found out he was the man the Obama administration hired to find jobs for Americans in the new green industries. Seems like a smart thing to do in a recession, but Van Jones got fired because he became the Scary Negro of the Week on Fox News, where, let's be honest, they still feel threatened by Harry Belafonte.

Now, I know that right now, I'm supposed to be all re-injected with yes-we-can fever after the big health care speech, and it was a great speech -- when Black Elvis gets jiggy with his teleprompter, there is none better. But here's the thing: Muhammad Ali also had a way with words, but it helped enormously that he could also punch guys in the face.

What got Van Jones fired was they caught him on tape saying that Republicans are assholes. And they call it "news." And Obama didn't say a word in defense of Jones and basically fired him when Glenn Beck told him to. Just like we dropped "end of life counseling" from health care reform because Sarah Palin said it meant "death panels" on her Facebook page.

Crazy evil morons make up things for Obama to do, and he does it. Read more.

February 15, 2020
Europe needs to strive for better relations with Russia in the long term, French President Emmanuel Macron said Saturday, adding that while he isn’t proposing lifting sanctions they have changed nothing about Russia’s behavior.  Read more.
Post a Comment
Read more

February 18, 2020
French President Emmanuel Macron is set to unveil a series of measures to combat what he calls “Islamist separatism” later on Tuesday, in a speech in one of ...read more.
Post a Comment
Read more