April 30, 2009
As Barak Obama continues in his attempt to grab as much [covert] power as he can, he has issued a series of very vexing statements saying that though top officials within the Bush Junta broke international law by employing torture tactics in secret prisons, this behavior should not be treated as "criminal" and Bush officials should not be held legally accountable. Obama, like Bush, seems to believe that the it's acceptable to break laws and bend rules, so long as you live a life of priviledge, power and prestige -- so long as you are a member of the ruling class. Needless to say criticism has ensued. Glenn Greenwald, a constitutional lawer who writes for Salon.com, writes most recently that:

* Torture is a crime.

* Nobody is above the law.

Unless you're David Broder, Fred Hiatt, Peggy Noonan or Tom Friedman, those premises of Obama's, as a matter of logical reasoning, all necessarily lead to one conclusion (hint: it's not: "This is a time for reflection, not retribution"). Greg Sargent has similar thoughts about the significance of this answer. Read more. 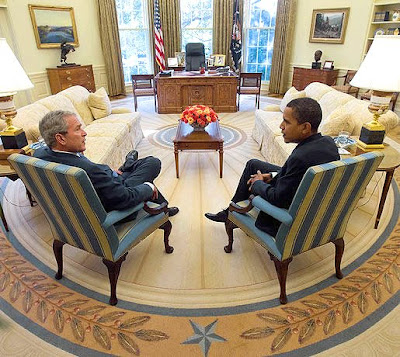 Published on Thursday, April 30, 2009
An Anti-Torture Memorandum for President Obama

MEMORANDUM FOR: The President
FROM: Veteran Intelligence Professionals for Sanity
SUBJECT: Torture

Torture is one of those accumulated evils. Violating domestic laws like the Foreign Intelligence Surveillance Act of 1978 is another. You were right to unceremoniously jettison former CIA director Michael Hayden, who betrayed the thousands of NSA professionals who, until he directed that domestic law could be ignored, had adhered scrupulously to the 1978 FISA law as NSA's "First Commandment"-Thou Shalt Not Eavesdrop on Americans Without a Court Warrant.

In contrast, we believe you were badly misguided in giving a prominent White House post to former CIA director George Tenet's protégé John Brennan, who has publicly defended "extraordinary rendition" in full knowledge that its purpose was torture. Brennan also had complicit knowledge of the lengths to which Tenet conspired with the Department of Justice to distort history and the law in drafting opinions that attempted to "justify" torture.

With all due respect, Mr. President, it would be another mistake for you to believe what you are hearing from the likes of Brennan and Hayden and the journalists they have fed and domesticated. Please do not be deceived into thinking that most intelligence officials, past and present, condone torture-still less that they are angry that you have put a stop to such techniques. We are referring, of course, to what President Bush called "an alternative set of procedures" involving cruel, inhuman, and degrading treatment that violates domestic and international law. Read more.