Crop failure may have pushed farmers over the edge, but American companies have been leading them to the cliff for years. 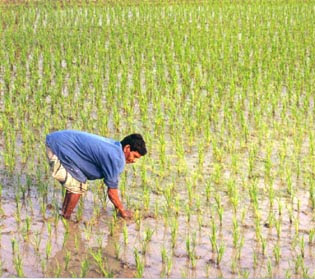 Alternet -The headline has been hard to ignore. Across the world press, news media have announced that over 1,500 farmers in the Indian state of Chattisgarh committed suicide. The motive has been blamed on farmers being crippled by overwhelming debt in the face of crop failure.

The agricultural state of Chattisgarh was hit by falling water levels.

"The water level has gone down below 250 feet here. It used to be at 40 feet a few years ago," Shatrughan Sahu, a villager in one of the districts, told Down To Earth magazine.

"Most of the farmers here are indebted and only God can save the ones who do not have a bore well."

While many may have been shocked by these deaths, farmer suicides in India, and increasingly across the world, are not new.

In the last ten years, the problem has been reaching epidemic proportions. In one region of India alone 1,300 cotton farmers took their own lives in 2006, but the culprit cannot rest solely on a falling water table. Read more.