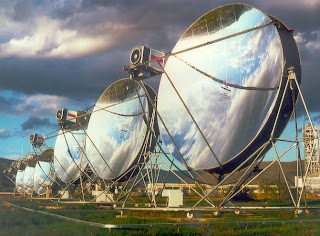 Wired Magazine - The largest series of solar installations in history, more than 1,300 megawatts, is planned for the desert outside Los Angeles, according to a new deal between the utility Southern California Edison and solar power plant maker, BrightSource.

The momentous deal will deliver more electricity than even the largest nuclear plant, spread out among seven facilities, the first of which will start up in 2013. Read more.
***
MIT News - In a revolutionary leap that could transform solar power from a marginal, boutique alternative into a mainstream energy source, MIT researchers have overcome a major barrier to large-scale solar power. Read more.

Good - A pair of Chinese companies are teaming up to build what might become world’s largest solar power plant. According to Reuters, China Technology Development Group Corp (the name is nothing if not comprehensive) and Qinghai New Energy Group “will begin building a 30 megawatt solar power station in China’s Qaidam Basin this year with an initial investment of $150 million.”

But that’s just the beginning:

“The project, which will combine thin-film and traditional silicon-based technologies that turn the sun’s rays into electricity, ultimately will produce 1 gigawatt of power, the companies said, without giving a time frame.” Read more.