Glenn Greewald @ Salon.com - Several weeks ago, I noted that unlike the Right -- which turned itself into a virtual cult of uncritical reverence for George W. Bush especially during the first several years of his administration -- large numbers of Bush critics have been admirably willing to criticize Obama when he embraces the very policies that prompted so much anger and controversy during the Bush years. Last night, Keith Olbermann -- who has undoubtedly been one of the most swooning and often-uncritical admirers of Barack Obama of anyone in the country (behavior for which I rather harshly criticized him in the past) -- devoted the first two segments of his show to emphatically lambasting Obama and Eric Holder's DOJ for the story I wrote about on Monday: namely, the Obama administration's use of the radical Bush/Cheney state secrets doctrine and -- worse still -- a brand new claim of "sovereign immunity" to insist that courts lack the authority to decide whether the Bush administration broke the law in illegally spying on Americans. Read more.

TocqueDeville @ Daily Kos - For those who don't know, or don't want to know, the Obama Justice Department made a most disappointing move late last Friday - late so as to circumvent the press in what is called a Friday news dump - of claiming immunity for Bush officials who broke the law by illegally spying on Americans.

As Glenn Greenwald points out, this is not just a continuation of the dubious claims of the Bush administration, but an entirely new claim that even the Bush legal team didn't attempt. Read more. 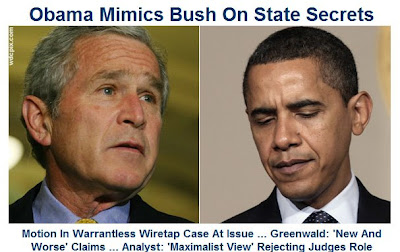 TPM - Is the Obama administration mimicking its predecessor on issues of secrecy and the war on terror?

Coming on the heels of the two other recent cases in which the new administration has asserted the state secrets privilege, the motion sparked outrage among civil libertarians and many progressive commentators. Salon's Glenn Greenwald wrote that the move "demonstrates that the Obama DOJ plans to invoke the exact radical doctrines of executive secrecy which Bush used." MSNBC's Keith Olbermann called it "deja vu all over again". An online petition -- "Tell Obama: Stop blocking court review of illegal wiretapping" -- soon appeared. Read more. 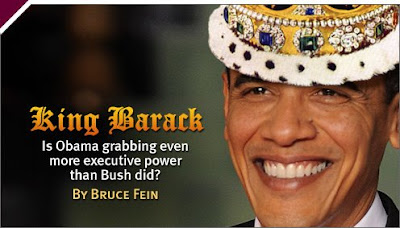