June 16, 2009
Max Eternity - While most of the mainstream press, including The Huffington Post, continue to perpetuate the notion that the voice of the Iranian people has not been heard -- that vote fraud has just taken place in the latest Presidential election, which saw President Ahmadinejad re-elected in a landslide -- there are still a few voices in the press, stating otherwise. The hype is loud and clear, President Mahmoud Ahmadinejad stole the election. But is that really the truth, or is it what the Western interests wants the world to believe?

Washington Post - The election results in Iran may reflect the will of the Iranian people. Many experts are claiming that the margin of victory of incumbent President Mahmoud Ahmadinejad was the result of fraud or manipulation, but our nationwide public opinion survey of Iranians three weeks before the vote showed Ahmadinejad leading by a more than 2 to 1 margin -- greater than his actual apparent margin of victory in Friday's election. Read more. 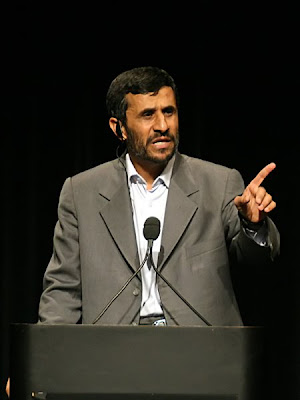 Ahmadinejad won. Get over it

Politico - Without any evidence, many U.S. politicians and “Iran experts” have dismissed Iranian President Mahmoud Ahmadinejad’s reelection Friday, with 62.6 percent of the vote, as fraud.

They ignore the fact that Ahmadinejad’s 62.6 percent of the vote in this year’s election is essentially the same as the 61.69 percent he received in the final count of the 2005 presidential election, when he trounced former President Ali Akbar Hashemi Rafsanjani. The shock of the “Iran experts” over Friday’s results is entirely self-generated, based on their preferred assumptions and wishful thinking. Read more.